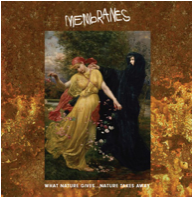 What Nature Gives... Nature Takes Away.

Membranes finally follow up their critically acclaimed universe-explaining 2015 album ‘Dark Matter/Dark Energy,’ which received rave reviews and radio play on BBC 6 Music and became the bestselling album in the band’s history.
The new album, ‘What Nature Gives…Nature Takes Away’ is a double album, using the band’s own 20-piece choir to juxtapose their dark drones and melancholic epic power across sixteen songs about the beauty and violence of nature. The album features guest appearances from the likes of Chris Packham, Shirley Collins, Jordan and Kirk Brandon, all dealing with various themes of nature and the cycle of death and life. Ding Archer is behind the wheel on production duties having produced the last nine albums by The Fall which is fucking highly commended at the least!

After getting back together on the request of Kevin Shields (My Bloody Valentine) The Membranes came back with a stunning album, a conception dealing with all things space and time which sounded like nothing they'd done in the past. All the trademark bass rumblings and primeval drumming were there but on a grander scale. Just when you think they couldn't get any more grandiose with their sound what do they do? Bring in the BIMM Choir to add to the already big soundscapes.

Lead track A Strange Perfume start the whole affair with John's whispering vocals backed by that angelic sound from the choir. Then the guitars come crashing in and it rocks. What Nature Gives... Nature Takes Away floats in with an infectious bass line that stays in your head and the choir just uplift the whole song making it a wonder. A Murder Of Crows goes all punk on our arses and gives a hint of John's love for all things Birthday Party with his maniac like vocals, screaming "Caw Caw Caw" over rumbling distorted bass and crunched guitars.
The City Is An Animal paints a picture of city life and the pockets of nature cropping up in small areas of town. Think of all the new apartments cropping up with their artificial gardens. It's dark and brooding, but manages to shine. The 21st Century Is Killing Me is like a follow up to 21st Century Man off the last album, yet totally different in sound. It's like Spiritualized in many ways with the hypnotic guitar sound, and the choir go gospel!! Brilliant.

Deep In The Forest Where The Memories Linger has a Joy Division mixed with early Floyd feel. A slow builder with a proper psych feel. The guitars crash in the drums are primal as fuck, and John drawls out the lyrics with an enticing snarl backed by that choir. It proper rocks out like fuck with a sprawling guitar attack at the end. Epic stuff. Black Is The Colour ticks all the boxes for me. A bassline to kill for that rumbles in with psych effects. Repetitive at it's best. And those guitars.... Fuckin' ell! This should be a single. Totally separates the men from the boys in songwriting skills. 84 year old folk singer Shirley Collins makes the first guest appearance on A Murmuration Of Starlings On Blackpool Pier which has some cracking visual lyrics referencing the annual Tory Party conference, discarded knickers on the beach, the beauty of starling formations. It's a dark song with smatters of beauty and very gothic. The Magical And Mysterious Properties Of Flowers features powerful vocals by Kirk Brandon and goes proper tribal psychedelic. Rob Haynes has such a distinctive drum sound he can call his own. Powerful stuff.

Mother Ocean / Father Time kicks in with the dirtiest bassline going and John's vocals are menacing as fuck backed by the ethereal guitars and more click drumming. Love the bass change in the middle. Snow Monkey is old skool Membranes at it's best. Straight out punk rock here. A short stomper, dirty as fuck with that drawling snarl all over it. Stand out track for me is Demon Seed / Demon Flower featuring his old mate Jordan. Another fuck off earworm bassline, disjointed smattering sound effects that fuck you up, and a great guitar refrain that goes west. Very clever. I wouldn't like to hear this on acid! Fuckin' tune. The Ghosts Of Winter Stalk This Land slows the pace right down with it's mellow dark beauty. Proper dub stuff going down here. Pass me the spliff. Clever as fuck, whispering vocals, Ding's production excels on this one. Haunting stuff. Chris Packham the nature TV presenter guests on the tribal sounding Winter ( The Beauty Of Violence And Nature). It's like something you'd hear on your headset in a museum. Death is compared as life's loving partner and the music is hypnotic to say the least. Nocturnal ups the tempo again with another one of those fuckin' basslines that get into my head. The squalling guitars and trance like lyrics are great. A close cousin to Joy Division's Transmission with more bollocks. Last track Pandora's Box is a haunting closer featuring the choir at it's best and is trademark Membranes tune, brooding, menacing, gothic. It's got the lot.

What a comeback. When you think their last album was that good it had to be remixed by a plethora of artists? This is a massive leap forward and should see The Membranes getting the recognition they deserve. A sprawling ambitious album with a lot of thought put into it. Definitely a contender for one of the albums of the year!