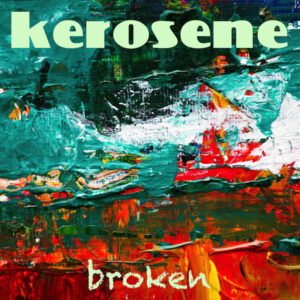 Kerosene are back after 25 years with a promising new album of gems from their past recordings that were never released, all dusted up and brought to life in a time when many bands could have fit right into this amazing scene we have at the moment. Wayne Carey remembers the times and welcomes the boys grown up into this diverse arena in the world of the t’internet.
In 1994 there was a healthy underground thing going on just before the Britpop explosion blew a hole in the grunge / punk scene of Manchester, paving the way for lad rock, Suede, Blur et al. I remember the bands on the outside fringes at the time as I was part of Fruit Tumor who got the attention of the boss man who produced their first single. We all gigged together, bands like Thrush Puppies, The Wax Tablets, Kerosene, Flatback Four, Skywalker, who became the excellent Solar Race. We all had regular gigs in Oldham, Manchester City Centre (mainly The Roadhouse, The Boardwalk, PJ Bells, all now sadly gone, sole survivor Band On The Wall) with healthy followings that came back for more. We all played In The City, the brainchild of Tony Wilson n all! The two bands of note were Skywalker who signed to Silvertone as Solar Race (George Lucas issues…) and released some fuckin ace stuff (R.I.P Eilidh) and Kerosene who originally released some tunes on Dead Dead Good (Charlatans label) before finally going for the big bucks with Seymour Stein’s Sire Records. Kerosene have unfinished business hence this new album I’m reviewing. I thought I’d include their press release to give you a bit of insight before I fuckin’ bore you with my review….
Back in 1995 Manchester’s noisy pop-punk kids, Kerosene were mentally and physically ‘broken’. After years of relentless touring and studio work the band left Sire Records in disagreement over the planned second album release and subsequently the doors were firmly closed on that chapter of their lives.
In late 2017, after more than two decades apart the founding partnership of Paul Taylor (vocals) and James Mountford (guitars/programming) were back in contact, and the band’s Facebook page was created to establish an historical footnote of their work. Soon afterwards contact was made with Mr Hancox (bass) and momentum further gathered on the social media front. In the summer of 2018 a box of VHS tapes were recovered from James’ loft, which included live footage of the band at Manchester’s Roadhouse in 1994. This included a live performance of a never released track ‘Bravura’ which had become a live favourite with its mega-crescendo whig-out ending. This footage was coupled with an early studio demo of the song as a bit of fun to share with the band members for prosperity. Around the same time another unreleased track ‘Shut Up!’ surfaced on Sound Cloud, leading to the re-connection with drummer Chris Willcocks and finally with guitarist Chris Walton. Although the five members were split across different parts of the UK and Germany, a reborn creative energy sparked up, and following the sharing of ‘Bravura’ via YouTube, the band opened the dusty boxes of reel-to-reels containing over 30 never released songs! The band took it upon themselves to conduct a full audio overhaul on the best of these tracks. Using current digital technology these songs have been fully reworked, with new eq remastering, reediting, enhancements, extensions, extra vocals, drums, guitars and brand new compositions. All this has been done digitally, remotely and with no financial input, true to the original DIY punk ethos of the band. December 2018 saw the download and streaming release of the ‘Concussion EP’, a collection of 6 tracks, headed up by ‘Comatose’ and supported with ‘Weird Up Here’ and ‘Formula Rock’ – the latter two having video project releases via YouTube. This EP clearly demonstrated the band’s more mature and diverse song writing stance and paved the way for the 12 track ‘Broken’ album.
The album kicks off with three fired up grunge punk numbers including All A Lie and Punk Rock Agenda which bring back those hard fuckin grafting days of DIY we all had to sweat for. Catchy riffs and vocals from that 90’s era that sounds so fresh today.
Inside Me comes across as something that could have been a big hit with its pop hooks infused with that grunge feel that resonates in 2019. Broken is a slow number that tells the story of the scars that are healing from the fallout after the Sire incident and is quite heartfelt within the lyrics. Heart Set is another anthemic type pop punk Americana themed tune which fits well in the scheme of things. Luna is a pure Pixies influence cracker which bodes well. Spacegirl goes into Ash territory with it’s pop hooks and melodic guitars from James, and Paul Taylor sounds exactly the same as he did in the 90’s. Shut Up! and Tonight (another Pixies influenced winner) keep it real without sounding all same oh same oh which gives the whole listen a nice experience for the nostalgia crew who couldn’t quite get the Britpop thing.
Best track by far is the closer Bravura. It starts off with a pyschedelic atmospheric stance that builds into a Soundgarden on acid type rumbler on a night out with Peter Doherty, then totally rocks out with excellent chugging riffs and a bit of white noise on top before bedding down into that chilled space again.
A cracking comeback from the lads who have a point to prove, and wouldn’t let sleeping dogs lie. Good luck to them! Check out this rare footage from The Roadhouse in 1994!