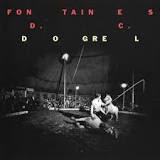 Every year we all get a group that are that hyped up by the so called clued up media it puts you off straight away. At least Idles had released an album before the greedy hype machine got on board. Fontaines DC have been around a while as Louder Than War reported way back before their debut has dropped. Is it justified? Fuckin' damn right according to my ears!

This bunch of Dublin lads seem to have come from nowhere, however they've been around a while, honing their craft with an early rockabilly style that has melded into this stormer of a debut. It kicks off with a short sharp blast with Big, clocking in under two minutes it's pure guitar fuelled punk with Grian's distinct vocals stating 'My chilhood was small, but I'm gonna be big' A smart start that shudders to a holt suddenly. Sha Sha Sha is pure rockabilly tight shit with it's terrace like chanting and smart beats. If you've not heard Too Real by now you are not into music. It's been played to death but never gets boring, kicking off with a Smiths like guitar sound  which pulls you in then drags you by the neck with that great crunching noise and the mantra of 'Is it too real for ya?' It's the vocals that get me. Grian sounds like no-one else around with his repetitive drawl that works on all levels. Television Screen is the nearest he gets to actually singing and sounds like the direction Joy Division would have veered into if Ian was still around. Top tune. Hurricane Laughter is a tour de force of squalling crunching guitar that builds and builds like a future Fall track and is a rush to the senses. A stand out for me with it's hypnotic drum beats and repetitive mantra. Roy's Tune slows the whole thing down with it's melodic undertones and poetic lament from Dublin City. A total change in direction. The Lotts doesn't crank it up again but is an excellent track that swings along with cryptic lyrics and a sort of Cure type direction if you get me. It then cranks up again with three belters in a row, the surf rocker banger Chequeless Reckless which is another short sharp hitter, Liberty Belle which is a nod towards Libertines / Vaccines territory and bounces along nicely. Boys In The Better Land is a proper indie rock bouncer which will be played for years on our airwaves, probably the most radio friendly song on there and an oldy in their terms. Last track Dublin City Sky is an ode to the fair place they have grew up in and could easily come from the songbook of Shane McGowan. It shows their proper love of Irish roots and is a fitting end to a fuckin good debut. The trick is that each song is different yet the same, they have a unique vocalist, the repetitiveness that The Fall used to great effect has been perfected and they pen a great tune. A rush of a record that places Fontaines DC firmly on the music map.

* = supporting IDLES
+ = with support from Pottery