Debut album by the tri continent punk power pop trio delivers on all fronts. Check out my Louder Than War piece. Details of a special gig at Night People also announced!! 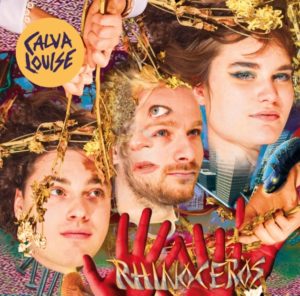 Rhinoceros
Modern Sky Records
CD / Vinyl / DL
available now
9/10
The power pop punk trio from three continents deliver a fuzzy buzzing ten song debut that hits the spot. Wayne Carey listens in and gives the verdict.
I stumbled across this promising trio while having a beer in Jimmy’s Bar, Manchester before a gig I was attending later on in the night. They were soundchecking downstairs and sounded fuckin’ ace. A local legend John Hall informed me they were Calva Louise, the support group for a now well known band from Doncaster. I was at that gig and they were blinding. Little did I know they had a forthcoming album up their sleeve which I’m going to tell you about.
Hailing from three continents this trio met in London at a music night, it all clicked and they joined forces. Introducing vocalist from Venezuela, Jess Allanic, drummer Ben Parker from New Zealand, plus bassist Alizon Talo, this band were meant to be. The album was recorded in London at Hermitage Work Studios produced by Margo Broom (Fat White Family, Goat Girl, Catholic Action) and each track is a killer.
I Heard A Cry kicks in with an infectious riff that turns into machine gun fire sound effects, filled with a pop hook that Blondie would be proud of, especially when you have a drummer who could have been taught by Clem Burke. Great start. I’m Gonna Do Well is another banger and Jess has that right balance between great harmonies and that Riot Grrlll banshee scream to perfection. All the elements of those great female fronted bands from the nineties with grunge bollocks.
Tug Of War is catchy as fuck and you can feel this band are connected in every way. Great riffs, rolling bass and catchy chorus combined to create an anthem that is up there with the likes of Belly, The Breeders etc. Outrageous is a stormer. Dirty bass, crunching guitar riff, angelic yet menacing vocals, loads of ‘la la las’ going on. I can hear myself shouting out loud to this one live.
No Hay mellows the whole thing down with the haunting whistling and the Madder Rose type feel, then it builds and slows down then builds. These guys know how to play and they are welded together in that tight mesh of power pop like they’ve been practising for years.
Getting Close is probably the best track here as they combine the lot. It pulls you in with a hip hop style drum beat and you think this is just gonna funk along with Jess’s smooth vocals. The guitars kick in and it all goes up a gear. Jess has a piercing scream which is mixed so clever it doesn’t sound disjointed, and the bass just delivers on all counts. The closest you’ll get to a grunge hip hop number. Arctic Monkeys have done it before but not to this effect.
Wondertale just hits the spot yet again and I’ll have to mention those glut of great nineties bands from the USA again. Not a bad thing as there are not many bands around at the moment that can relive the magic from that era and make it sound relevant in 2019..
Cruel Girl is right up on the Babes In Toyland / Hole shelf but could also fit nicely on a Blinders album (Think I Can’t Breathe Blues with a female vocalist). Pummelling and skilful it lifts the stakes for punk power pop on all levels.
Down The Stream is the most mellowtrack on here and seems to be all about not being with her father but staying in touch. A beautiful song which sends shivers down my spine when I hear it. Think Kristin Hersh when she delivered Hips & Makers and you’ll know what I’m on about. Closing track Out Of Use again gives you memories of The Breeders, Belly and Throwing Muses and is full of hooks, melody and fucking great songwriting.
This is a cracking debut by three young musicians who met by chance and have that spark that set them up high in the stakes of the scene today. After seeing them live I wondered whether they could translate to record. They certainly have and as debuts go this will be in the albums of the year polls without a doubt. 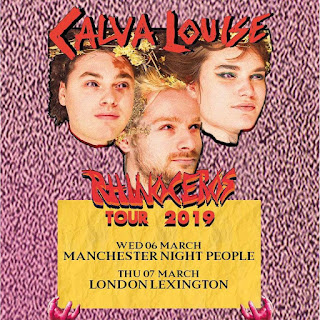