The Rising: Are You Ready To Fly - Album Review 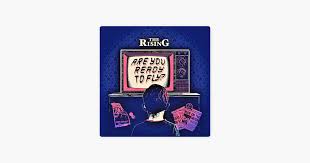 Are You Ready To Fly


There are not many albums that get to me on the first listen. There are no bands out to claim the throne of the big indie bands like Oasis, Courteeners, The Roses. Ok, I've mentioned all Manchester bands here but outside our fair city there's not many out there, maybe ermm Kasabian. This collective from Southampton are gonna fuckin blow you away. My fellow writer Ged Babey from Louder Than War has been backing them for years and now I know why. First let me introduce you to the band members as they all have a part to play in this and have worked their bollocks off (Emily hasn't got bollocks...) for years producing and recording this at the famous Rockfield Studios in Monmouth. Oasis, The Roses, Black Grape, fuckin Queen have recorded there.

Before reviewing this I listened to their first album which is actually really good. Very retro, harking back to the days of The Kinks, The Small Faces, The Who, you get it. Three years of their own money, holding down days jobs, grafting like miners and genuinely loving music, they have totally upped their game although sticking to their original roots with added gloss and classic songwriting. I've been told Tommy Overington is the epitomy of a working class hero and first thing that strikes me is that the whole band have been credited for writing the songs, no Morrissey and Marr shit going on here.

First track Are You Ready To Fly opens like a classic indie anthem and drags you in straight away. The Liam comparisons are there but don't let this put you off. It's a masterclass of a tune that will leave you wanting more.

Feels Like I'm Dreaming But It's Real starts of with a Lennon tilted vocal but in Tommy's own characteristic charm. A slow burner which turns into a Hacienda flaked banger due to Emily's vocals which have a Rowetta effect and you can see this being a booty shaking number live. The synths just take away all the indie comparisons to make the sound fresh and modern. And that's the difference between most indie by numbers bands. They can change tact with effect.

Olympus is one of my stand out tracks. It's a sweeping ode to the sound of The Kinks and you can see the Kevin Parker (Tame Impala) influence on Tommy all over. It just screams catchy and you can hear their fans sing every word when they air it live. A classic.

Lord Please Show Me The Way To Go wanders into Northern Soul territory and gives you that Twisted Wheel and Wigan Pier feel and I swear Amy Winehouse could have an inkling of influence on this!

Kaleidoscope Eyes again starts off as a slow take on a love song but ups the tempo with that funky baggy sound going in with the upbeat drumming. Lots of psychedelia going in here which makes it stand out from the rest.

Talk To Me is just beautiful. A cracking ballad which again leans to Lennon. Emily's output gives it that, dare I say Beautiful South feeling. Fuckin cracking songwriting that is up there with Wonderwall, or Married With Children. If this song was A listed on the radio the band would be massive.

I Want You (I Need You) is another indie banger. It rocks out as good as anything around at the moment and the lyrics, I'll let you make your mind up... 'Wakey wakey, rise and shine, the man in the mirror is taking up all my time' mmmmm.... Again the synths will probably freak out the kids but may wake them up to bygone instruments that standard bands shun. Prog never died.

Bring Me Back To Life continues as another masterclass of songwriting. Tommy just sounds like a natural. Another nod to Oasis here but with their own original take. Even Brendan Benson gets a nod on this one. The band as a collective sound tight as fuck and if they continue in this vein they will hit the big time.

Carpet Ride is just wonderful. A psychedelic 8 minute cracker which builds and builds from the sitar entrance to the ganga cloud mist of wibbling synth and Hammond organs. It's like listening to ELO on acid at one point. A perfect ending to an album that just has that I Am The Resurrection vibe to it. I'd even say a hint of Funkadelic going on here (check out Maggot Brain).

Tommy and the band have been raised on a three L diet. Liam, Lennon and Lydon. You can hear the cockiness in there, the female backing vocals give it a twist and steer them away from your typical lad bands. This could make them massive and deservedly so. It's about time a band out of Manchester hit the big time with the same swagger of the big guns.

The indie kids need a new icon to look up to and I reckon Tommy Overington ticks all those boxes. Fuck the twee pop shit like Blossoms or The 1975. This is the real deal. If you love your indie then this should be in your collection. I've already converted some of my workmates after one listen. An essential album and one of the best this year.