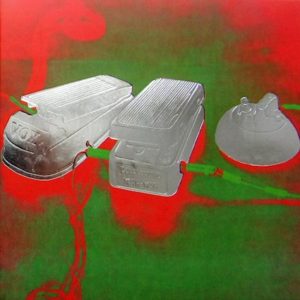 Step back into the early nineties with this hidden gem of an album which was only available on mail order before this t’internet thing we all now take for granted. The sound of Jason Pierce starting his sonic journey which has never ended…. Wayne Carey gets a bit nostalgic.

I’m actually one of the lucky ones who witnessed their first tour in 1990 when they hit The Boardwalk in Manchester. Most of the audience were sat down on the floor if I remember rightly and it was a strange night by all standards. Lazer Guided Melodies was released soon after and this live album was sandwiched between the release of 2nd proper album Pure Phase. I must admit on missing out on this album but remember being blown away by the spectacle of Jason Pierce and band in 1993 at a free festival in Preston. They had come on big time. This album brings back all those memories.
It consists of seven tracks recorded on their first US tour and gives us a glimpse of that early magic that was the blueprint to Ladies & Gentleman We Are Floating In Space. Take Good Care Of It lifted from Pure Phase starts the show and you can feel the build of the songs structure sweeping out to the audience with the shimmering guitar effects, deep bass and drums and those lighting effects which look like they are being directed by the instruments (if you’ve seen em live you’ll know what I mean). I Want You is one of the early numbers which got me in the first place with it’s garage undertones swamped in that old Spacemen 3 psychedelia and goes down well. Medication was always a thing of beauty with it’s toned down blues drone and drug addled lyric content. Angel Sigh is and always will be one of my favourite early tracks starting off in beautiful calming bliss then rattling you awake with that great guitar noise hitting your senses. Walking With Jesus gives you a taste of what Spacemen 3 were really about when Jason and Peter Kember actually got on and still sounds great today.
The album ends with a double whammy of Shine A Light and the brilliant Smiles from the debut album. Shine A Light just builds and builds with a myriad of sound hitting you quadraphonically and just wigs out with trumpets, saxophone, wild keyboards, feedback time 10, get the picture??  Smiles does a similar thing to you but ups the rocking stakes more and just kicks in from start to that crashing finale.
Since those first two albums back in the early nineties Spiritualized have morphed into a more blues, gospel machine and sound miles away from this era, although you can still feel the presence of that Jason Pierce magic from the early days holding all the grandeur of the songs together. This is a great introduction to a great band for a live album and as I’ve mentioned they have to be seen live to witness the true glory of those wigouts. They certainly caught my attention back in the day and this gives you an insight into the growing genius of Jason Pierce in his chrysalis years. Great stuff.