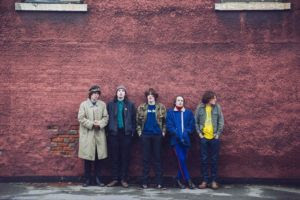 Photo credit: Andrew Whitton.
LTW favourites Cabbage have had a good year. Their own art exhibition, a top 30 with their ace debut album and a great UK tour ending with a mini festival at The Ritz in Manchester (see live review here: http://louderthanwar.com/cabbage-manchester-ritz-glamour-review/). They take some time out to let me know their favourite albums. Each member of the band gives me their top two picks!

Lee Broadbent - Vocals
Butthole Surfers - Locust Abortion Technician
I remember very clearly the first time I listened to the satan introduction collapse down the stairs and fall into a black Sabbath cover. This album just tips the rest of the records for me due to that immediate feel of 'getting it' right away. I heard it at a time when contemporary music sounded dull and resting. It felt like the music I wanted to hear and wanted to play. Going from incredulous to inspired after The first listen I always have to include it in my favourite records. The human cannonball is my person favourite, it sounds like if joy division were raised feral and ate mushrooms and pro plus for tea.

Country Teasers - Destroy All Human Life
For anyone like me who's niche is DIY anti-country ballads then this is the perfect album. His ability to insight all negative stereotypes into first person lyrics is such a great reflection of British conscience that people could relate to from any of the last 4 decades. The repetition in the music is captivating and the direction it takes always increases your attention. From the musical letter to Datblygu singer David Edwards to the paradox of conservative yearning in come back maggy every song is just spot on. Golden Apples could possibly be one of the greatest and simplest songs ever written and although he now has a resounding cult following its hardly known.

Eoghan Clifford - Rhythm Guitar.
Beach House - Bloom
Perfect for getting yer 'ed down in the van...that may not sound like much of a compliment but it truly is. When I hear that intro to opening track 'Myth' it conks me reet out it does. The perfect antidote to our hell inspired sprautrock.

Echo & The Bunnymen - Ocean Rain
I spend a lot of time with people from Liverpool and they have brainwashed me in to choosing this album. My heart also now lies with with other artists such as Kraftwerk and Bob Dylan but this one pips it for me. Hats off to Will Sergeant...the guitar work makes me weak at the knees, especially on the track 'Angels and Devils', it cuts me in half with a bread knife.

Asa Morley - Drums.
Sugar-Copper Blue
This album has been a favourite of mine since a young age. My parents played it alot in the car and its just stuck with me since. Bob Mould just writes great songs, it's as simple as that

Fugazi-Repeater
Fugazi will always be one of my favourite bands and this album is the reason why. Every song on it is terrific. As a drummer, listening to Brendan Canty and his ability of writing interesting parts but also playing for the song is admirable.

Stephen Evans - Bass Guitar.
The Beatles – The White Album.
I was given 2 albums at an early age which continue to influence the way in which I listen to and write music. Black Sabbath’s self titled debut released in 1970, and Help by The Beatles released in 1965.
Help encouraged me to further investigate The Beatles’ back catalogue, where I found the 1968 Beatles self titled album, otherwise known as The White Album. To me, this double album, full of such a variety of different styles of song, is a masterpiece and firmly holds the number 1 spot in my list of favourite albums. I continue to aspire to write a song half as good as anything on this album, perhaps excluding Revolution Number 9 which just annoys me. My top 3 songs off this album are Rocky Racoon, I Will and Julia.

Black Sabbath – Self Titled.
Black Sabbath’s debut album inspired a fondness of the macabre and riff based music inside me. The band intended to combine their music with horror, subject matters concerning the occult, and dark stage theatrics. They named the band after the Mario Bava film of the same name, which is responsible for my ongoing obsession with horror films. Black Sabbath are the pioneers of the heavy metal genre, as they combined riffs with dark imagery and dark lyrics of dread. Led Zeppelin is not heavy metal, as it misses the key macabre element. My top 3 songs off this album are N.I.B., The Wizard and Black Sabbath.

Joe Martin - Vocals / Guitar.
Chameleons - What Does Anything Mean? Basically.
Unsung heroes of the 80's indie scene. The Chameleons paved the way for all of the following Manchester scene. This, their second album as they were pulling away from their existing record company, pushes Mark Burgess and Reg Smithies song writing ability in another direction from their stunning debut album Script for the Bridge. Fantastic, atmospheric, powerful, stunning songs.

My Bloody Valentine - Loveless
What at first comes across as an aural manifestation of the Texas Chain Saw Massacre soon reveals itself as a spellbinding mix of complex song structures, melancholy vocals and droning but intelligently applied feedback guitar. Behind the white noise lies a whole world of hidden melodies, sleepy moans and mesmerizing rhythms that with every listen evoke further oneiric horizons.

Website: http://www.cabbageband.com/
Facebook: https://www.facebook.com/cabbagelechou/
Twitter: https://twitter.com/ahcabbage?lang=en
Words by Wayne Carey who writes for Louder Than War. His author profile is here and you can catch his blog here.
Posted by Wayne Carey at 04:28 No comments:

Ey up people! Get your ears round this album!! 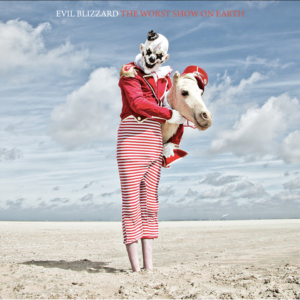 Evil Blizzard crawl out of Preston, and deliver their third album which is clown shoes and epitomises the Spinal Tap review ‘Shit sandwich’. Wayne Carey reports the torment….

Who the fuck do these guys think they are? Dressing up like nonces and a bloke dressed like a pig trying to look hard with a few big knives? Fuckin’ Boy George scares me more! The one with the mop should make a comeback and sweep up this sorry messs…
Joking apart this third album from Preston’s finest delivers on every level. When Everybody Come To Church came out a few years back you’d have thought they couldn’t get any darker or menacing. This 8 track stunner proves me wrong. It opens  like a soundtrack to a horror film before evolving into a belting rhythm of drums and bass, then more bass as it cranks up the volume with amazing guitar effects you thought couldn’t be made with a bass guitar. Hello is as powerful an opener as Are You Evil was and doesn’t stop here. Blizz fans will have heard the glam stomp of Fast Forward Rewind and it is becoming a live favourite as I witnessed at The Ritz earlier this month. Unleash The Misery is like a menacing nursery rhyme you’d use to keep your kids in order as Side sneers the lines ‘with half an ounce of avarice and half a stone of spice’ like a whispering Ozzy, and then sprawls into a pysch stomper with bollocks. Those We Left Behind continues the assault and has a nice surprise in the chorus as you can actually hear a tinge of a more rockier Embrace going on which was probably planted by that McNamara bloke! Like A God chugs away into a Sabbath mantra and you just know these freaks can play and fuck about with that bass. Blizzpig plays a big part on this album as there are lots of synth effects going on throughout the show. Stand out track is a pure blast of 2 minute speedpunk, namechecking FilthyDirty and the Blizz Family and totally blows me away with its Motorhead meets the Ramones stylee. Then comes the obligatory dub pysch 12 minuter which is what they do best. Slow building into a dark rock cracker reminiscent of Whalebomb. Closer, The Worst Show On Earth is eerie as fuck and crashes out into an apocalyptic storm and insane German ramblings which Stoko from the band explained to me. You work it out…
The whole point of Blizz is they’re not trying to be different or groundbreaking. They’re just doing amazing stomping Black Sabbath tinged hard rock shit which is what the people are missing. They glam up in their weird costumes and masks, play fucked up bass driven tunes and just wanna rock like fuck for their own pleasure and our displeasure. They write great tunes that worm their way into your head and batter your senses. It’s all about the stomp rock that drags you in.
Another album of the year by a mile!