I'm back people. Been busy lately trying to learn more about the history of music. The Louder Than Words Festival was great stuff. Watched talks from some punk legends including Steven Ignorant from Crass! Even had a good chat with Lee from Cabbage about this blog page!! Anyway I got to have a chat with the excellent Frank Turner and here's the outcome! 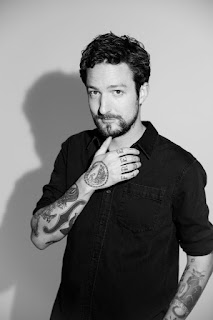 One of the most cherished British artists working in music today, Frank Turner will release a retrospective set spanning his illustrious career this month, 'Songbook' will bring together highlights from across Frank's six albums alongside ten brand new 'Songbook' versions of some of his most well loved tracks. These reimagined versions see some songs re-recorded in full and some stripped down to an acoustic setting. Being no stranger to LTW I speak to him about the album, his own festival and what the future holds after completing a sprawling 2,000 plus gigs in his 12 years of songwriting.

Hi Frank. You're 12 years in now with 6 albums under your belt and a best of coming up. Why have you decided to do this now?

Well a lot of it is to do with the Lost Evenings Festival I did in May​ in Camden and I was trying not to repeat songs over the four nights and ended up playing about 85 different ones, and that gave me a chance to look over everything I've done as a collection and think of myself as a songwriter. It was that and the record I was starting to work on which will be out next year as yet untitled. It's gonna be something of a stylistic departure from the preceding six. It's not gonna be a drum n bass record but it feels like a different chapter to me, so it looks like a good time to look around and sum up everything before I go somewhere else.

I notice you're releasing a boxset including your documentary 'Get Better' which follows your 2,000th gig. How did you feel that night?

Amongst other things I felt tired, and it's a funny thing that show counting business. Obviously I started doing it to keep a record of what I'd done, and when it came up to 1,000 I made a bit of a deal about it, you know I threw a party and everything and when it came up to 2,000 everyone else was making a deal out of it and like people were messaging me saying 'Where's it gonna be?' So it became a beast that was out of my control and other people knew more about it than me and I didn't want to take it too seriously. It was an excuse for another party. It was one of my favourite shows and I kind of wanted to document what me and The Souls were doing in a venue of that type. I think that was where we kind of excelled. It was a fun night and there was an after party which I didn't get all that stuff into because I was tired!

How did The Lost Evenings Festival evolve?

I wanted to do a festival of some kind due to doing every festival on God's green earth as far as I can tell. We were talking about doing something outside. I couldn't think of doing anything different from 2,000 Trees or Beautiful Days you know. There are people already doing that so what was the point of me copying that? I was trying to look at other ideas of something to do and I was thinking about of like Meltdown Festival with like some of my friends say Wolf Alice. They did four nights at The Forum in Kentish Town a couple of years and I went down to some of those nights and they had different supports every night, and a friend of mine I was having a couple of drinks with said "shit, it's like a mini festival" and i said "Yeah" So we did it and this year it was great because I'd never booked or ran a festival before and neither had any of my crew, so we were definitely learning and that's why we're gonna do it in the same place next year and build on the lessons from this year. But saying that, one of the things we've learnt from this festival is that it's transportable. We could do Lost Evenings in Boston, in Melbourne or wherever we wanted really. We've got a big plan to take it around the world as we go forward.

When you were picking the tracks for 'Songbook', considering your massive output did you find it difficult?

Picking the songs for Songbook there were two elements to it, the acoustic songs and the greatest hits and I also thought I could rework some tracks. I actually sat down and thought right, this is gonna take for fucking ever. I think a lot of people have this idea that popularity and artistic work can go together but I just went for what I feel were the tracks important to the audience and myself personally to make a solid mix.

The acoustic versions on the album have been really stripped down. Do you plan to tour them like this?

That is something on our long term 'to do' list. We done a few shows before when we've done stripped down bits and we've done two radio sessions, and The Souls and I we've really enjoyed it, covering the songs with like mandolins, and brushes and like one drum, we've experimented with some of that. The next album we're gonna do, as I've mentioned will be different and we'll be adding things, not taking them away. We night have to hire a horn section which is going to be interesting. I don't really know how to do that but we'll find out! But yes, in the future there will be some kind of stripped down show which will be really fun, or just a solo tour you know?

So this next album will be like a closing chapter to your previous stuff then?

Sort of. I don't wanna get too excited about it. It's not like I'm killing off Ziggy Stardust & The Spiders From Mars. The thing with some of these new songs is we're sort of like gonna entrench a bit, go back to like first principals. I've been definitely trying to make some new noises this time around. I like to think this will be different but the jury will be out. Like Neil Young with Trans. I really respected him for doing that. I think it was cool as fuck. He simple went out and made a synthesiser vocoder album. I don't think it was very good but he didn't give a fuck, There's only one ACDC in the world and good for them. There are a few bands that are allowed to do that!

You seem to be constantly touring. Is this still the plan for the future?

We are gonna be touring but in the collective of my band and crew we've got three kids in there, and as you've noticed I've got a kitten (plenty of "What the fuck are you doing cat?" throughout the interview!). Everybody's in their mid Thirties now and it's just like, that thing we did in our Twenties when we toured  for 14 months straight and did 400 shows a year and all that sort of bollocks, you know first of all none of us can physically handle it any more and we don't really need to do that any more, and we've got a reason to go home. I think to go forward, I mean we're gonna tour hard for album seven when that comes out, but I think we're not gonna spend more than four weeks from home. There was a time in my life when I thought that was regarded as weak in some way and I've now kind of realised that nobody else gives a shit other than me and I need to relax.

Frank is currently recording his 7th album in Texas due for release in 2018. The Lost Evenings Festival will also be returning next year. Songbook will be released on digital and CD on Friday 24th November, with a vinyl and deluxe boxset edition following on Friday 15th December.