Album Review and Interview
Kicked In The Teeth – 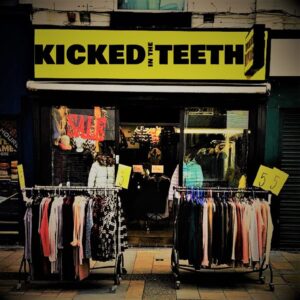 Kicked In The Teeth (Self Release)
DL
Release Date: 1st November 2019
Brand new old-school streetpunk ‘n’ hardcore from raging veterans featuring ex-members of The Business, Helsinki Seven and Face of Christ.  Steel-toe-capped punk for motorheadcases … Wayne AF Carey reviews and interviews in his inimitable style.
Fuck me… There’s some angry shit being released this year.  So why don’t we all just kick back with some dirty speed punk from Northwich, who kick a bit of dirt and fun back into the whole scene? Fuck yeah! I speak to drummer / Salty Dog boss Chris Mundie about his exciting new band of noise veterans that pack a punch and a kick in the teeth…but first the album…
Having known each other for over 20 years the guys have all been involved in other bands prior to this. Chris was the drummer for The Business for the final ten years of the band, Jay was in Incisions on drums, Joe was the lead singer and guitarist for Helsinki Seven and Mike played in pretty much every metal band in Cheshire, along with playing bass for infamous Chester hardcore band Face Of Christ. The album was recorded at Foxhound Studios in Byley by Mike Bennett. To try and keep things as live sounding as possible, the band recorded the music live and used room mics to try and capture an honest depiction of the band, only some guitars and vocals were overdubbed separately. Total recording time clocked in at under 24 hours and the 10 track album clocks in at just over 22 minutes.
It kicks in straight from the off with No Apologies Sorry a punk as fuck slammer with rough vocals, pounding drums and a rumbling bass with a simple 2 chord riff running through. It ends suddenly and One Way Street bounces in like an old school Mudhoney tune, it’s a grunge as it’s punk and sounds fucking top. It slows down a little with a fuckin’ killer bass line then whacks you straight back in the face with those screaming vocals that give it a scary edge.
Does it slow down? Does it fuck! Piling straight in again with Patient State which recalls early hardcore, simple power riffs, thundering drums, it relentless.These guys are having in your fuckin’ face fun from the start. Fill The Hole is the dogs bollocks and a live anthem by all standards. Slow down you bastards! I can’t keep up! Vocals wise it’s angry, they’re a bit of Lemmy in there and you can hear the venom. There’s even a metal influence happening with the small solo in between.
Relieve Yourself is just under a minute and blasts you. Crass anyone? Is this about having a piss in a back alley? Who cares? It’s a top buzz. Boys In The Backroom is the mellowest track on here if you can say that. A dirty bit of grunge flecked punk rock that probably gives the band a rest in their live set. Getting pissed backstage comes to my mind. There’s no artsy bollocks message happening here, just letting off steam.
Northern Powerhouse is 37 seconds long and hardcore as fuck. Fuck…. Then a triple whammy of speed punk meets hardcore with Not Alone. Simple but effective. These guys have no pretensions, just pure loud shit for the old and new punks as Life In Numbers shows. Closing track Rain City starts with a menacing bass line then kicks in with a chugging riff and those 40 cigs a day vocals. And then it ends…
And that’s it 23 minutes of no nonsense hardcore speed punk, no frills, no glitter to decorate a turd. Just a fun loud album to wake you up and give your brain a jolt. Expect these guys to be at Rebellion next year. I’ll show my arse after a curry if they’re not on the bill. For fucks sake, they’re supporting UK Subs soon!!
Bandcamp
Facebook
Kicked In The Teeth – Interviewed. 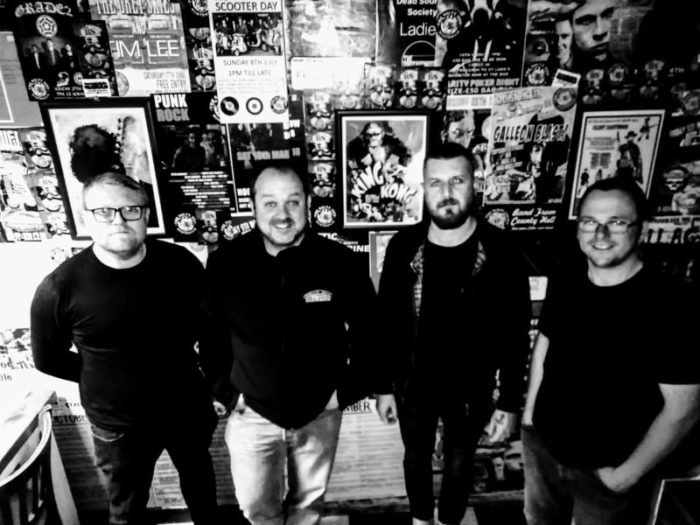 LTW: How did this idea of an underground punk super group start?  (Chris was the drummer for The Business for the final ten years of the band, Jay was in Incisions on drums, Joe was the lead singer and guitarist for Helsinki Seven and Mike played in pretty much every metal band in Cheshire, along with playing bass for infamous Chester hardcore band Face Of Christ.)
Chris: I’m not sure Super group is accurate, but it sounds good. We pretty much started the way any band should, a pub conversation, we’ve all known each other for 20 odd years, so it was a pretty natural thing to do.
LTW: You’ve all been around the block on the punk scene. Why do it all again?
Chris: Enjoyment, it’s something all of us have always done, it’s our hobby I guess. I don’t think any of us really thought we’d get to the point that we were gigging and recording, but it’s all come together really nicely. We have a slightly more relaxed approach to things I think, we are all a bit older, having known each other as long as we have it’s easy to thrash things out without the worry anyone is getting offended, it’s just fun. Sometimes I think people are a little embarrassed to say that, we do it because it’s what we want to do, it’s important to us that it’s good, we take pride in what we do, but when it comes down to it you’ve got to enjoy what you do.
LTW: Tell us a bit about the album then.
Chris: It’s great. It really is, I spent years in bands playing things down a little bit, when we were kids it wasn’t cool to big yourself up, but now we’re older I’ve got no problem with it. I genuinely like the record, it’s got balls, the songs are good, it’s an honest album too. We recorded the majority of the music live, then did a few guitar overdubs and put the vocals on, the production is great, Mike at Foxhound was good enough to just let us do what we wanted and was on hand to make it sound good. 10 tracks 22 minutes, in and out no messing about!
LTW: Kicked In The Teeth as a band name? Where did that come from?
Chris: That was probably the most difficulty thing we did, we had a few other names on the way to KITT, but the ones we liked ended up being existing bands, Kicked In the Teeth is also the name of a Zeke album and also an AC/DC song, figured they were decent enough bands to share words with.
LTW: Where did the album artwork spring from?
Chris: That was Joe’s idea, it’s the now long defunct Stolen From Ivor shop in Northwich, we are a band from Northwich, we are proud of where we are from and we figured it was a nice little nod to anyone who grew up in the area. You could draw parallels to The Melting Pot album cover too if you wanted, but it wasn’t a deliberate process of thought. They are (as I type) in the process of ripping down the old precinct including that very building, an intellectual journalist like yourself may interpret the cover as a statement on change, rebirth and the inescapable truth that nothing lasts for ever and eventually decay will come to us all, but from that decay can spring something vibrant and new infused with the DNA of what went before………………. but we just thought it looked cool.
LTW: Who is influencing you at the moment and who’s on your radar?
Chris: There’s loads of cool stuff about at the minute, I never really like picking anyone in particular out as I could give you a list as long as your arm, albums this year though, if I had a gun to my head and had to pick a couple I would say the new Gimp Fist record, the new Grade 2 one as well, they played in Northwich a couple of times at The Salty Dog, but they look like they are about to blow up massively.
LTW: What are your plans for next year?
Chris: Gigs, we’ve already got half a dozen or so lined up, some of them aren’t announced yet, but we start the year off on the 11th of January with the UK Subs at Redrum in Stafford. If you  wanted to catch us this year we are at The Hairy Dog in Derby with Guana Batz on 7th of November, with Pizza Tramp in Stamford on 7th of December and then at our hometown gig in Northwich on the 27th of December.
Bandcamp:
Facebook
Instagram
Words by Wayne Carey who writes for Louder Than War. His author profile is here
Posted by Wayne Carey at 06:35 No comments: 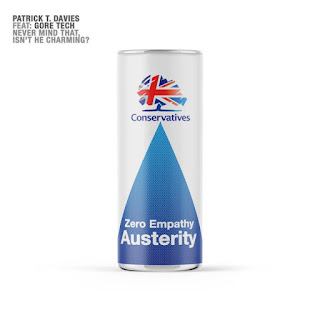 Oldham spoken word artist Patrick T. Davies has teamed up with renowned breakcore producer Gore Tech to release a new single that represents a visceral 6-minute assault on Boris Johnson and the post-Brexit UK establishment.
The track’s lyrical content takes on everything from the current PM’s cultural ignorance, his slights on those involved in the Hillsborough disaster and his suggestion that war-torn Libya should be the next new tourism hotspot. Wayne AF Carey checks out another slice of spoken word hip hop.
Anyone who is a fan of LTW favourites The Blinders will remember Patrick as the voice behind the album promos before Columbia was released. He earlier released his debut 5 track EP Terrible Twenties which went under my radar (I still have a rough demo he gave  me!), however this has got me excited. Great production going on, a big fuck off to this government, grainy Northern video, top techno hip hop beat, what’s not to like?
Will the people listen though? ARGH KiD has released the incendiary R10T and everyone’s too fuckin scared to play it on air! Patrick does his own take with a swipe at the countries state, but rants on even more. Highly unlikely then we will hear this on the radio… so lets make it go viral -word-of-mouth style.
Live Dates:
November 3rd – The Salty Dog, Northwich
November 8th – The White Hotel, Salford
‘Never Mind That, Isn’t He Charming?’ is available to stream and download from all digital platforms now via Bare Minimum Scum Ltd.
Spotify
iTunes
Deezer
Tidal
Social Media Links:
Patrick
Instagram
Facebook
Twitter
Gore Tech
Instagram
Facebook
Twitter
Words by Wayne Carey who writes for Louder Than War. His author profile is here
Posted by Wayne Carey at 00:26 2 comments: 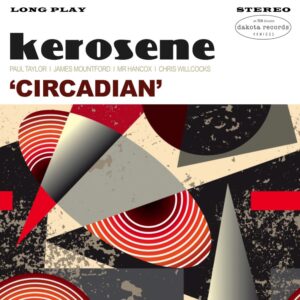