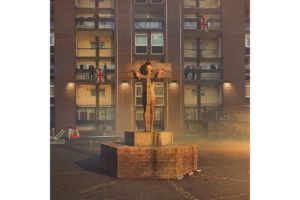 Nothing Great About Britain
CD/LP/DL
Method Records
Available now
There are quite a few new artists these days delivering the goods with their debut albums. Can Northampton hip hop grime artist Tyron Frampton join the ranks with his? He’s already making waves with his live shows. Wayne Carey gives it a spin.
Slowthai knew the title of his album long before he wrote a single bar of it. He knew he wanted the record to speak candidly about his upbringing on the council estates of Northampton, and for it to advocate for community in a country increasingly mired by fear and insularity.
Title track, Nothing Great About Britain, dives straight into the subject of the state of Britain today, as the beat kicks in and he spits out about the EDL, real English boys, St Georges flag, Doc Marten boys. He paints a vivid picture of today’s state to a banging beat and this reminds me of the first time I heard the opening track on Original Pirate Material (The Streets). And he calls the Queen a cunt. Straight for the jugular.
Doorman is an angry track with a kind of hardcore feel to it, a crossover if I’ve ever heard one. Imagine how many people he converted when supporting Slaves! It’s rock rap at a high standard and tells the tales of mad nights out, trying to pull girls and egging on bouncers. Love the glue sniffing news report outro!
Dead Leaves is hip hop grime at its best, and it hits on bad relationships being brushed aside to get a better life, whereas Gorgeous mellows out a bit in soundscapes and has loads of good synth effects flying around, while he shows his love for his home town, Northampton. It then cranks up again with the dirty sounds of Crank, the flows being upped by his unique voice. You know he’s making an impression when he can pull in heavyweights like Jaykae for Grow Up, and early grime star Skepta, for the Tarantino inspired Inglorious which has the two swapping beats and rhymes and announcing, “Come up against us and you’ll fail”.
Toaster slows the pace down again with a more dubstep style going on, more intelligent words, and a style of his own. Peace Of Mind is one of the highlights, a short and sweet banger with the Resident Evil warning siren floating in and out, and even giving a shout out to Sid Vicious. Missing just flows and you get the feeling that this guy isn’t going to stick to that grime tinged sound for long. As I said before the crossover potential is huge. He has the rage in his rap style that would sound great with a guitar band. Last number, Northampton’s Child, is a cracking closer, an autobiography of growing up being looked after by his single mum, losing his brother, the tough times of council estate life, and the touching line of “No way I can pay you back / I just hope I can make you proud”. An emotional end to an album that has similar feeling to The Streets debut, except more angry and vital, painting a picture of modern life for today’s youth. A unique take on modern hip hop and grime that takes it to the next level.