The Next Wave 2019: Gig Preview - The Salty Dog Northwich. 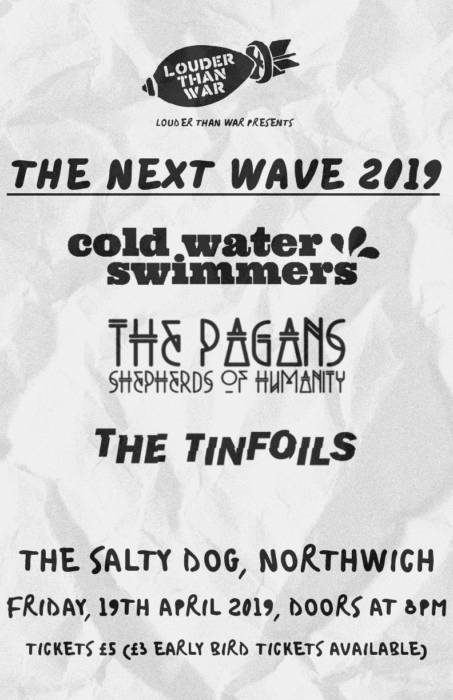 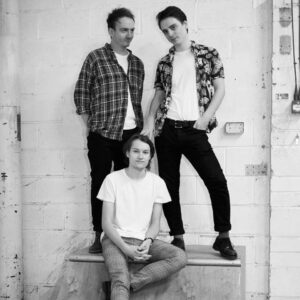 The Tinfoils
The Tinfoils are a three-piece garage-punk band based in Manchester, whose frantic brand of ‘no frills’, DIY guitar-driven music rages against the private security companies who police the streets of Britain, the royalist media machine, the inescapable nature of a 20-odd year old’s overdraft - as well as having the odd song about thrush.
Since taking to the stage in early 2018 the band have played a string of gigs and festivals across the North of England, with highlights including supporting HIMALAYAS and checking off some of Manchester’s most prestigious live music venues. Born in Yorkshire but made in Manchester, The Tinfoils are predominantly influenced by contemporary bands such as IDLES, Thee Oh Sees, and Cabbage, but also take inspiration from a number of ‘70s rock ’n’ roll bands such as Buzzcocks, and Richard Hell & the Voidoids. 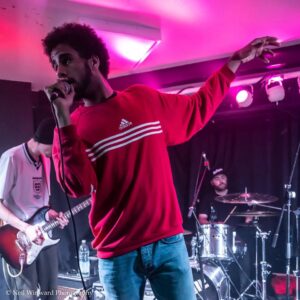 The Pagans S.O.H. (Shepherds Of Humanity)
This bunch of hip hop funk infused Black Country lads are getting a name for themselves on the circuit. Marcus is one of those bonkers front men who stamps an impression on you from the start. The strength of their songs speak for themselves and his rap delivery is unique with the falsettos and snarls and sometimes freestyling craziness. This is a band that can go all experimental one minute then pull it all together again into a tight structure at the drop of a hat. They improve with every gig and they have their own sound which can't be put into any scene at the moment. 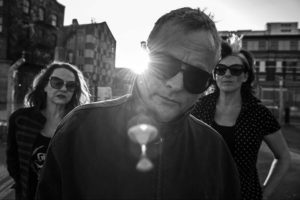 Cold Water Swimmers
Chris Bridgett needs no introduction on the Manc music scene. He's been around for some time, notably with the underrated Dub Sex who still have a large cult following to this day. CWS are like a summer breeze (!!!). Teaming up with the tight knit team of Selina and Carrie works well, with the fragile vocals from Chris which are out there individually in terms of sound. Hollow and stark yet also uplifting as witnessed on the chorus of Summer Breeze, which is in my top 5 single releases this year. Another band that don't fit into any scene and can hold there own on the live scene. Professional, tight and sometimes enthralling to watch. A great band to add to your 'must see live' lists.

LTW Review here: https://louderthanwar.com/cold-water-swimmers-summer-breeze-ill-be-your-witness/
Six months down the line and all three of these groups have come a long way with their live sound, improving with every show and it's great to get them all back together for a reunion gig before festival season. If it's like last year it's gonna be one night to remember!!
Tickets:  https://www.wegottickets.com/event/463506
Words by Wayne Carey who writes for Louder Than War. His author profile is here and you can catch his  website here
Posted by Wayne Carey at 04:21 No comments: 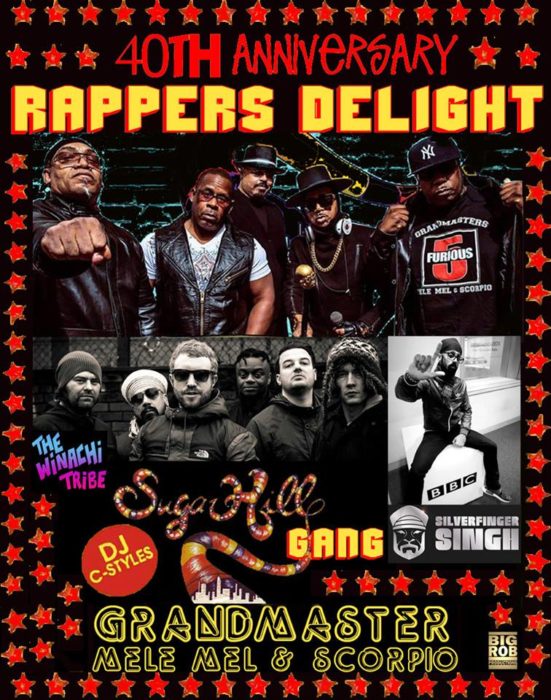 ‘The Winachi Tribe’ announce the FUNKiest shows of 2019 as ‘Special Guests’ to Hip Hop   Royalty ‘The Sugarhill Gang’ & ‘Grandmaster Melle Mel & Scorpio’ from the legendary ‘Grandmaster Flash & The Furious Five’ as part of their world tour celebrating the 40th   anniversary of Hip Hop classic ‘Rappers Delight’!!!

Also on the line-up is MC and ‘BBC Leeds’ D.J ‘Silverfinger Singh’…Son of ‘The Winachi Tribe’s acclaimed percussionist ‘Inder Goldfinger’.

‘The Winachi Tribe’ have a long history with the pioneering South Bronx Hip Hop band ‘The Furious Five’. Taking inspiration for the name of their previous band ‘China White’ from ‘Melle Mel’s groundbreaking anti cocaine song ‘White Lines’. China White then went on to collaborate with ‘The Furious Five’ rapper ‘Scorpio’ on their track ‘Aggression’ which featured on their ‘Kitchen Sessions E.P’. They then featured as ‘The Furious Five’s tour support on their U.K ‘Legend To Legend’ tour which also featured another legendary New York rapper…Kurtis Blow.

As ‘China White’ became ‘The Winachi Tribe’ they once again hooked up in 2017 with ‘Melle Mel & Scorpio’ & ‘The Sugar Hill Gang’ for a series of shows throughout the U.K to rave reviews!!!
Don’t miss the chance to see this electric line-up as they kick off the summer of 2019 in legendary style with two exclusive shows in Manchester & Leeds!!!
28th May – Leeds University
29th May – Manchester Academy
TICKETS 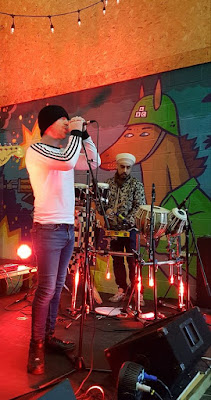 Argh Kid
The Pagans S.O.H.
SWJ Group
Silverfinger Singh
Karl Hildebrandt
Alphabet Brewery, Manchester
Saturday 23rd February
When you get a group of up and coming bands together all with their own originality and blend of style, all put together by the team that brought Membranes and The Blinders together last year (now named Birds On A Wire), this time working with Musicians Against Homelessness you know you’re in for a great night. It works on all levels and you can feel the love in the air before it even kicks off. Wayne Carey gives the verdict!
Photo Credit: Georgina Robinson.
This line up was always going to be interesting as it mixes many musical directions whilst retaining a funk fuelled melting pot of talent. Kicking the night off is PROPER Manc poet Karl Hildebrant. This guy is taking off and this is why…. He enters the stage with his PROPER notebook and gives us a lesson in poetic delivery. It’s dark, deep, humorous, Manc tales with his own twists. Crackling is funny as fuck as is the brilliantly named Tit Hill which names most of the estates dotted around town and the characters within. He actually does two sets tonight and both entertain. He even has a quick dig at Louder Than War just to wind me up! 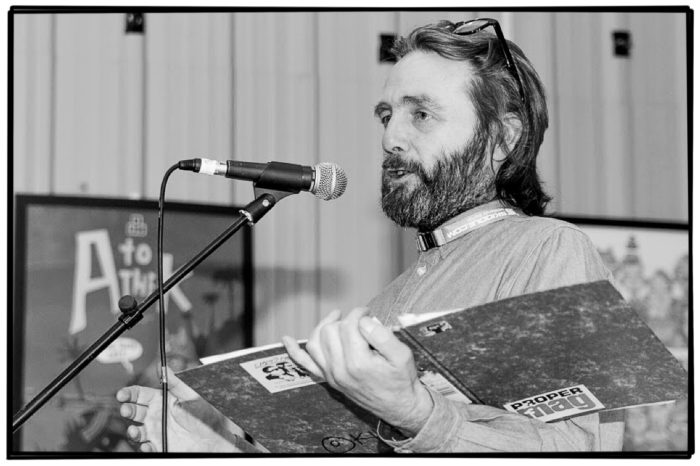 Silverfinger Singh is son of Goldfinger (Winachi Tribe) and hits the stage with his sharp observational hip hop. Most of the set tonight comes from his Education Road EP released last year. He gets the place going with his reggae bhangra tinged beats and his cool delivery. A new tune is unleashed upon us named Ekta and it works big time. A great start to the music on offer. 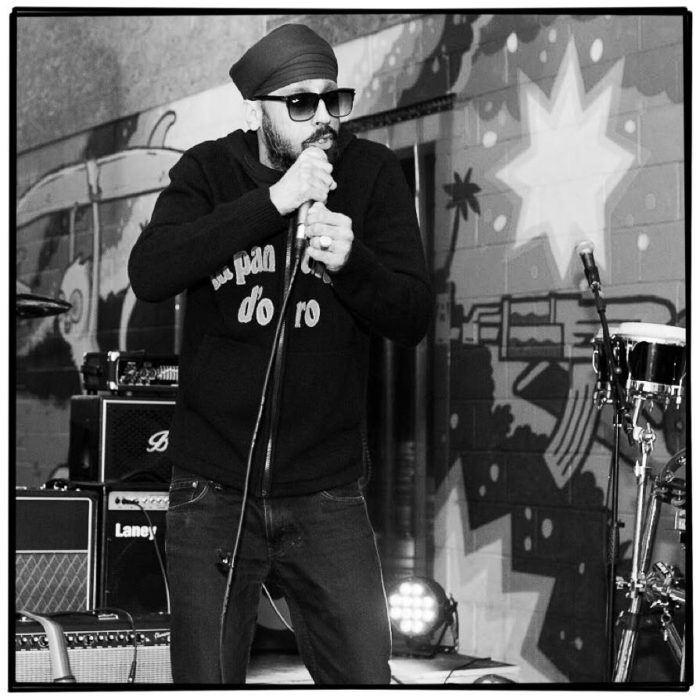 SWJ Group are a bit of a treat. They’ve been pissing around all night photobombing everyone and generally mingling with the crowd like cheeky Northerners. When they enter stage it’s like watching a baggy Manc psychedelic party popper explosion. There are grooves in there that recall The Mondays at their best but with a mystic feel which goes in a Primal Scream direction yet also reminds me of a lot of the Liverpool psych scene which is knocking on the door.  I really don’t know which direction they’re heading but I like it! 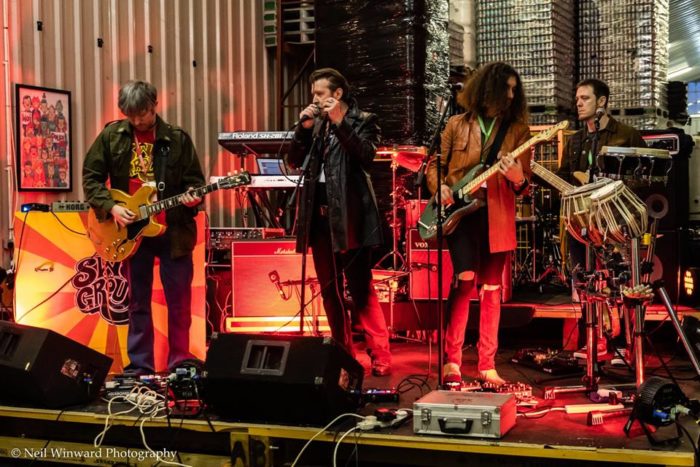 Photo Credit: Neil Winward Photography.
As many who read my shit will know by now, I’m a big fan of Pagans S.O.H. I’ve seen them a few times now and they just up that game every time. Tonight is the penultimate gig for bass player Tom and he plays his heart out tonight to show you how much he loves this group. Marcus is in fine form tonight launching into a proper funked up version of early song Cocky. They’ve always been good at pulling off improvised jams and do it again tonight. That is testimony to how good they are. One minute you get that Chillies feel then they launch into stuff like Emergence Of A Forgotten Power which is like R.A.T.M but with a more mental frontman. The stage is packed with gear so Marcus has to calm down a bit more than usual. Although he does get into the crowd at the front at one point to give his legs a bit of boogaloo. Ending with the brilliant single Banananah they leave the stage knowing there are some more converts. You have been Paganised! 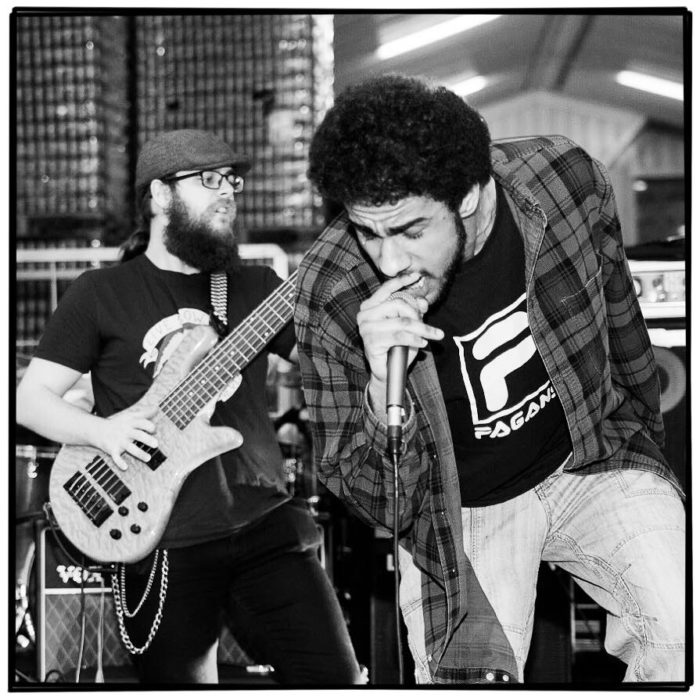 Dave Scott (AKA Argh Kid) is just growing and growing. When I first heard Frank I knew something was happening. He’s been known around the scene for a few years now due to his MUFC connections and his cause for helping get young people into poetry with workshops and other ideas. He now has a full band to accompany his street observations and it’s fucking good stuff. Along with Jim Adnitt – Drums, Ian Barber – bass and new vocalist and keyboards – Hayley Youell, Dave is sussing that sound he’s looking for. I’m familiar with the intro from last time I caught him, however I get a shock when he launches into brand new track Neighbours, the funny as fuck tale of gentrification reviewed here (https://louderthanwar.com/argh-kid-neighbours-new-single-review/). It’s stomping live and he gets his point across to the non hipster audience. Reunion is ace with his own take on The Fall’s – Blindness, although you can actually decipher his lyrics… He has that knack of storytelling without sounding like a cocksure rapper from the states. Totally his own style with a cracking band to give it the boost. Never Drinking Again is the highlight with it’s quite brutal but true story of drinking too much with regret (mmm). Another great set from the new star of our streets. 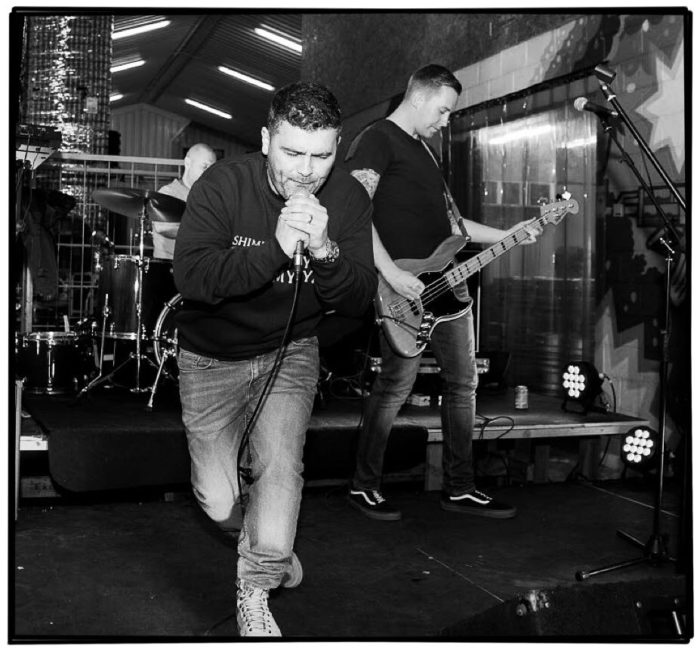 Winachi Tribe are a bit of phenomenon to me. They are like a unit that have done things in reverse. Clothes sponsors in Italy, residing and recording in California, making music with videos with the like of Keith Allen, working with Howie B and Danny Saber. Fuckin ell! But they remain grounded from the vibes I get from Liam Croker. Their set is a masterclass in funky R&B tunes and the percussion is ace due to the sprawling bongo set up of Inda Goldfinger (bigger budget than the Ian Brown days then.) It adds to the whole sound and songs like Time For Love are brought to life with a more rough edge from the polished production of their recordings. A Room With A Zoo sounds great and they are in complete control with their funk fuelled, even techno house vibe especially when they launch Transition on us. This is a group that are destined for big things over the pond, yet will they remain a cult band over here? They have that lift live and we are missing Northern funk in these times of post punk wonk grrlll blues rock domination. I’m converted anyway. The love in the venue is testimony to that. A band for those funked up summer festival days where their tentacles will spread some funky magic across the fields. 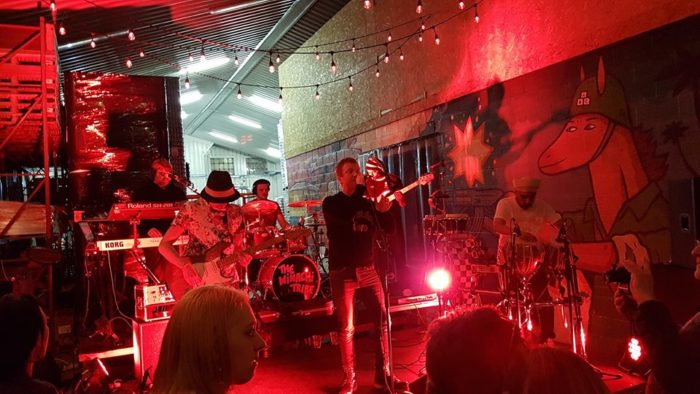 Photo Credit: Georgina Robinson
Photo credits: (all B&Ws) Sal_GigJunkie, Use of these images in any form without permission is illegal.
Posted by Wayne Carey at 04:00 No comments: