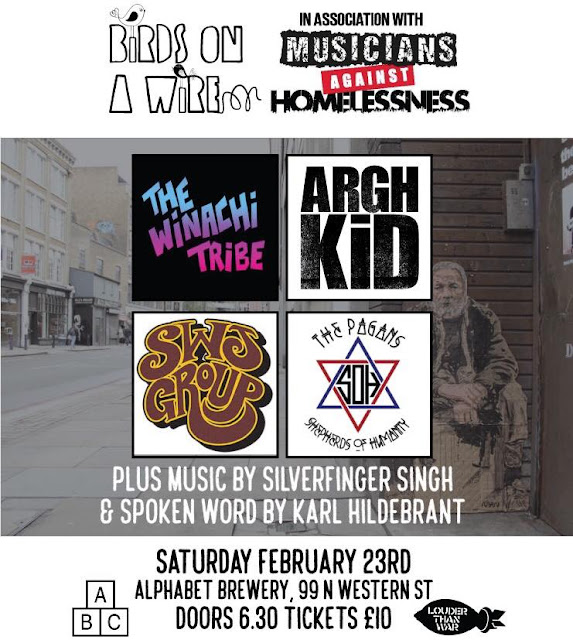 Following on from the success of turning Alphabet Brewery into Manchester’s newest pop up venue by staging the Punks 4 West Papua gig with The Blinders, Membranes, Witch Fever and Modern Family Unit, Georgina Robinson (Factory Records) and Jo Lowes (Puffer Fish Press, Fab Radio) are teaming up again under the guise of new venture “Birds on a Wire” to bring more unique gigs and events to the Alphabet Brewery Tap.
This first funked up offering will be Saturday February 23rd in aid of Musicians Against Homelessness featuring The Winachi Tribe, Manc street poet Argh Kid, SWJ Group, The Pagans: Shepherds of Humanity, Karl Hildebrandt and Silverfish Singh. After the live music is wrapped up the Winachi Tribe will be hitting the decks. The brewery will be offering it’s usual blend of Alphabet drinks and street food in their extended outdoor space.
Each band on the bill offer their own unique style, so what better way than to give you the lowdown on each act says Wayne Carey. 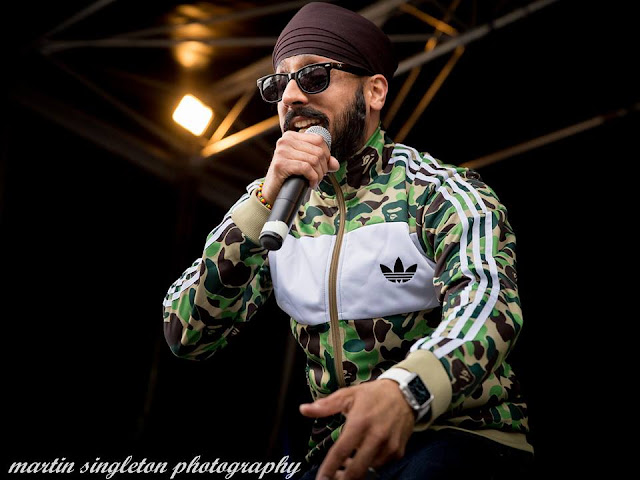 SilverFinger Singh
Son of Inda from Ian Brown fame / Winachi Tribe all round geezer he blends a fusion of Hip Hop, Reggae, Indian style to his craft. debut music album in 2018 titled (Education Road EP).
As an artist his music has been featured across BBC Asian Network / BBC Radio Leeds / BCB Radio / TV Conwy / Radio Sangam / Fever FM / Soho Radio & Radio Panj.In live shows he has had the honour to support live on stage the likes of Ian Brown (The Stone Roses), The Sugarhill Gang, Panjabi MC, Celt Islam & The Winachi Tribe. A great addition to this line up.

Karl HildebrandtPoet and professional gobshite from the Dirty North West. Writes to keep the noise quiet. His words have had glowing recommendations from Denise Johnson and MC Tunes amongst others. Currently looking at a busy year. Writes with a honesty that sometimes scares yet titalates. Wears lovely trainers. 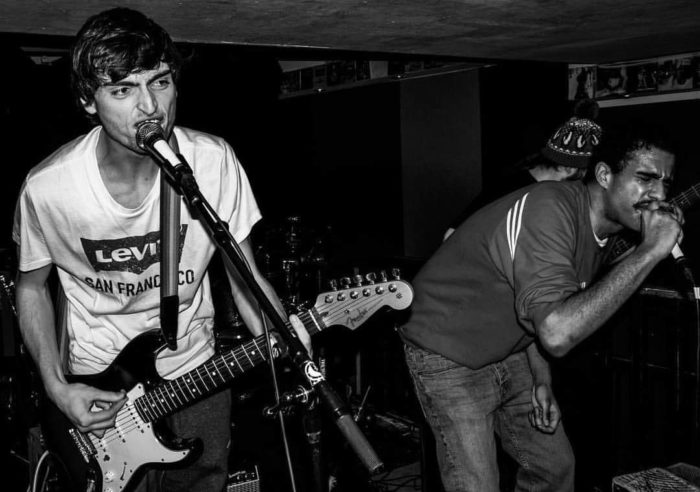 Photo Credit: Anthony Conway Photography.
The Pagans S.O.H.
Straight Outta West Brom these guys are one of my tips this year. I saw them first at The Castle last year supporting another promising band Cold Water Swimmers (review here: https://louderthanwar.com/cold-water-swimmers-manchester-castle-hotel-live-review/) and they had me from the start. Think Chilies, R.A.T.M, hip hop / grime and a bonkers frontman. Just check the excellent debut single out and decide for yourself. 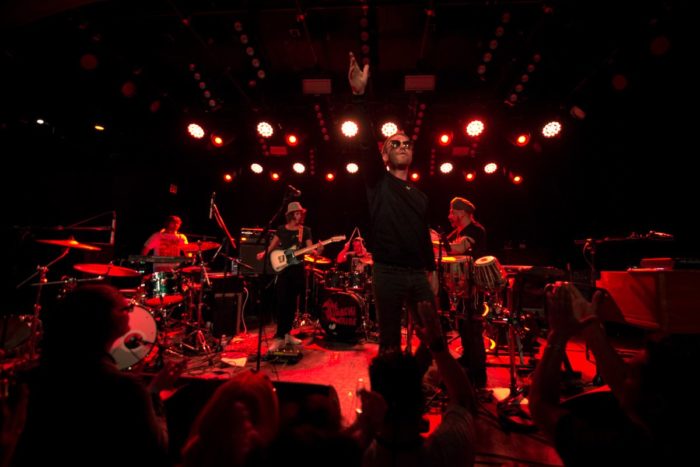 SWJ Group.
SWJ Group are a Mancunian band who make music to nod your head to. Our own Emily Oldfield had the radar out from day one (review here: https://louderthanwar.com/swj-group-scribbles-single-review/) Funky, groovy tunes with a hint of Manchester grit, they hit a groove and stay on it, making every gig an event filled with happy vibes. Wah, beats, keys and above all else top tunes combine to make a huge sound, some call it slacker funk, some call it Mancadelic – It’s best you see them and make up your own mind.In the words of the band themselves “All you got to do is live and love” 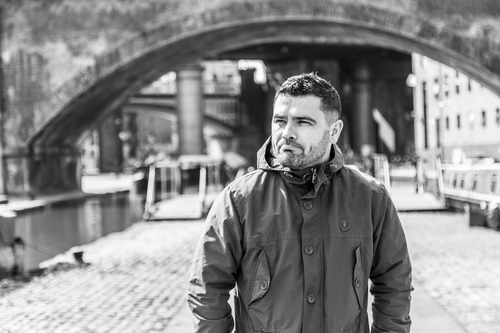 Argh Kid.
Another recommendation from a LTW fellow writer prompted me to check him out live when he dropped in on Northwich late last year (review here: https://louderthanwar.com/argh-kid-northwich-plaza-live-review-friday-7th-december/) Definitely one to watch as his debut album hits the streets from March and will be up there in the album of the year polls if the stuff I’ve heard is anything to go by.
This Manchester raised poet is winning hearts and minds with his verbal energy, gaining celebrity fans such as Liam Gallagher, Christopher Eccleston and Chris Evans. The “Acapella Eminem” is now the Official Poet for the NSPCC, UEFA and Manchester United and his work has been broadcast to homes across the globe. There are few artists in his genre able to provide on-point commentary and storytelling with the same spirit, skill and compassion. David is also a poet on a mission to make the art form accessible to the masses. Using his own experiences as a template he facilitates workshops across the country, creating a sense of what is possible to young people when you pick up a pen. He is often found across UK media and is a regular on ITV, BBC, BT Sport and beyond. His work has been reproduced in different languages and publications around the world from Denmark’s Politiken to The New York Times. 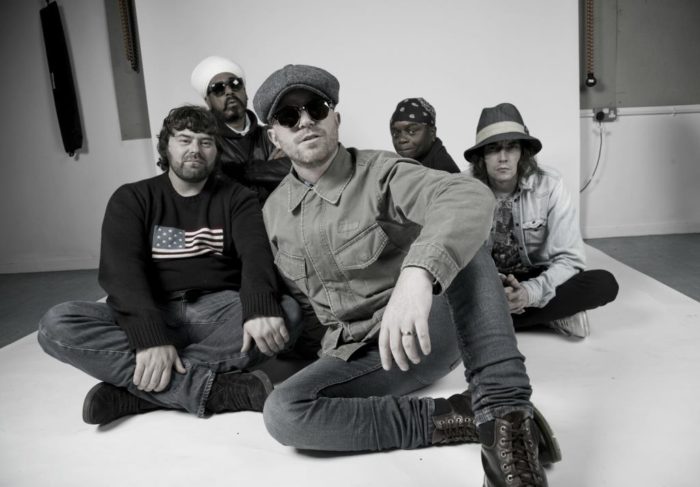 Photo credit: WAM Warrington Music.
Winachi Tribe.
‘Since the formation of the band in 2015 opening for Ringo Star’s Son ‘Zak Starkey’ in London’s West End ‘The Winachi Tribe’ have not stopped for a second.
Releasing a number of critically acclaimed singles (with two promotional videos starring acting greats Keith Allen and Hollywood star Tommy Flanagan (Sons Of Anarchy / Gladiator / Braveheart), the second filmed with Tommy Flanagan at his Ranch in Malibu, California, who starred in the bands video for single ‘A Room With A Zoo’ (not a bad black book eh?), collaborating with legendary producer’s ‘Howie.B’ ‘Danny Saber’ & ‘John X (Recording sessions with Danny Saber took place in the Laurel Canyon at his notorious Batcave studio & John X at the legendary Venice Beach Creation Centre). John is currently co.producing the bands debut album. They have gained Global press / airplay in both the U.K, U.S and China, including rotation on national BBC 6 Music, BBC Introducing, KCRW, KEXP, plus features in major publications such as L.A Times, L.A Record, Buzz Bands L.A,  NME, Billboard China Manchester Evening News & The Big Issue (All this achieved with no corporate backing, just raw talent and relentless hard work!!!) Tearing up stages at some of the UK’s biggest music festivals including Victorious Festival, Tramlines, Shiiine On Weekender, Moovin Festival, Bearded Theory & Sunflowerfest Belfast. Being booked as official tour support for Happy Mondays, Soul 2 Soul, Sugar Hill Gang, The Furious Five and The Charlatans, plus also headlining three of their own national U.K tours . The Winachi Tribe show no sign of slowing down!!! 2018 has seen the band head to America in March for their debut headline tour of the U.S (California) and a second tour of L.A in September which saw the band open for U.K Indie legends The Charlatans at the Teragram Ballroom L.A (it’s fair to say L.A has become the second home for this Northern U.K band of Funked up misfits…with their management H.R.B management also being based in West Hollywood). Summer 2018 also saw the release of critically acclaimed single ’Transition’ (picking up an official ‘Grammy’ entry along the way for best Dance track!!!) the release was backed by a 20 date headline U.K tour which was met by rave reviews throughout the U.K music press. The Winachi Tribe’s rise in a relatively short space of time has been astonishing. From humble beginnings as the U.Ks North West Electro Funk underdogs, to collaborating with a large impressive cast of legendary names from the world of music and acting, gaining major press / airplay all over the world and touring both the U.K & L.A to rave reviews. The world seems to literally be in their hands of Winachi, if they choose to take it. It’s an exciting prospect to see what the future holds for this unique band, dare I say it, Tribe.
Facebook – https://www.facebook.com/thewinachitribe
Twitter – https://twitter.com/winachitribe
Instagram – https://www.instagram.com/winachitribe
Website – https://www.musicglue.com/thewinachitribe

Tickets are £10 and on sale through Skiddle.
Posted by Wayne Carey at 00:00