Idles - Joy As An Act Of Resistance - Album Review 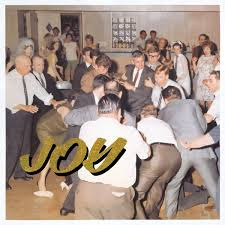 Joy As An Act Of Resistance

For all you old seventies punks out there, this is the revival. It's noise with a purpose, It's got a message. It's punk as fuck and brings back all the memories of intelligence in punk by the likes of Crass who were more than just a bunch of noiseniks trying to out loud the rest of them. I can't do this for Louder Than War as me mate Ged Babey is doing it the twat! Join me in a journey of reviewing the most important and brilliant album of the year....

I must admit I've heard some quality albums this year including the awesome Evil Blizzard which has been on rotation for a while now, however this one ups the stakes in a different way. Where the Blizz  have took Psych rock into new realms Idles have revitalised punk in the same way with a blistering album. Their first album Brutalism was a slab of punk that got everyone excited with noise again. This difficult (fuck off!!) second album stays on the same path but addresses issues we need to hear about. It's like a personal autobiography to slamming tunes from lead singer Joe Talbot and is sometimes disturbing.

Colossus kicks off with a one note heavy riff and clicking drumsticks and just Goes and it goes and it goes into a mental riffery of noise reminiscent of The Jesus Lizard. Then it all folds in with a growling bass lick, then ends. BUT it doesn't! It turns into an Iggy Pop punktastic gem mentioning putting homophobes in coffins, Evil Knievel, Fred Astaire??? Crazy shit!

Next up is Never Fight A Man With A Perm which dwells on blokes who think they are hard. Again more guitar heavy stuff with funny as fuck lyrics such as 'You look like a walking thyroid' and 'You Top Shop tyrant, even your haircut's violent'! Quality.

I'm Scum covers your basic Sun reading wanker and kicks in with a Sleaford Mods style bass line and hits you in the face with a killer chorus and clever lyrics.

If you listen to 6 music you've probably heard this song a lot. It's all about unification and loving everyone, colour, creed, religion, we're all one community. Danny Nedelko is already an anthem and catchy as fuck. The bring em up knock em down brigade are already out to bash Idles but this song gets catchier every listen. Early Pixies comes to mind with this one.

I get really uncomfortable listening to June which his obviously about his unborn child. That's what I respect about this guy. He writes songs about tragedy to a punk theme which must be his way of dealing with it?? 'Babies shoes, for sale, never worn' For fucks sake....

Samaritans is just blinding. Kicking off with upbeat drumming and lyrics like 'Man up, chin up, grow some balls' A punk thriller this one all about hiding behind your fears by being a man and not getting upset about a death in the family or other tragedies. They were even on ITV News about speaking out to vulnerable people with similar problems. A song with a message...

Television rocks out like fuck and ramps up the punk with it's message of 'Fuck TV' Another nod to Sleaford Mods here which is no bad thing as they are the forefront these bands need to follow.

Great is another bass driven thundering track from the eyes of a remainer in these Brexit shitty times. All about flying the flag for Blighty and all that bollocks but also coming from a British muslim point of view to set the balance straight.

By far the best track on the album for me Gram Rock is fuckin quality! it kicks straight in with a quite quiet start of disturbing noise 'I'm sorry you're Grandad's dead.... lovely spread' then ambles along nicely until a big FUCK OFF guitar drum bass thing smacks you in the face at full volume. Sends those music shivers up my neck every time I hear it. You need to hear this song...

Cry To Me slows it down a little little bit (honest) but still gives you that sense you're listening to something special. For some reason Kermit The Frog pops up in my head when listening. Must be a subconcious thing....

Rottwelier just rocks out to make the whole album a special thing. Mad guitars, snakes in boots, vultures in breakfasts, a great end to a thriller.

If you want to hear an album that kicks you in the face but also gives you a message then it's right up your street. If you don't like punk rock then fuck off and buy Now That's What I Call Music 100....