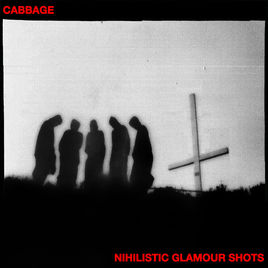 NIHILISTIC GLAMOUR SHOTS
CD / DL / LP
Release date 30 March 2018
9/10
There’s stuff brewing in Manchester again at the moment with a new wave of excellent Manchester bands coming through in their own unique ways. Cabbage have always been at the forefront introducing us to other bands like The Blinders, Proletariat and more. Their debut album doesn’t disappoint.
The dirty side of Greater Manchester has reared it’s ugly head with this band of misfits who don’t want to conform to the colour by numbers indie state of the norm we have had for years. Cruising away from the Manc swagger of the you know who’s they ramp up the odds with a dirty sound that still encaptures the anthems inbetween the mess of lovely noise.
This may surprise people as a daft comparison but Inspiral Carpets had the same game plan way back in the early nineties with their garage rock hammond organ led  take on alt indie. Always prolific releasing shit loads of songs before their debut album and nailing it. Come on, who can compare Life their first album with their ridiculously difficult 2nd album The Beast Inside? (One of my favourites). This is the path Cabbage seem to be going down, mixing serious issues with comedy and getting the right result.
They kick off with the surf punk stormer Preach To The Converted that sets the scene for the excellent Arms Of Plexoria which keeps the pace going while addressing the corrupt world of arms trading. This doesn’t stop as we get another blast of wonk punk with Molotov Alcopop. The pace slows down a notch with the Tarantino soundtrack like intro of Disinfect Us which sounds like it was written around the same era of It’s Grim Up North Korea with the catchy sea shanty like chorus. The killer Postmodernist Caligula was recorded and mixed in four days as a replacement for Kevin, a track they were not happy with it as they felt they had moved on.The result is a punk blast with a thrilling riff and screaming chorus most bands dream of coming up with. Exhibit A slows it down again with it’s country style and lyrics about “putting you mother first” and again has that catchy chorus we are getting used to with Cabbage songs. Celebration Of  A Disease you will have heard by now from their last EP and then the excellent Perdurabo with it’s nod towards Lee’s fascination with the occult. This Psychic TV tinged tune sounds menacing and will surely feature live soon enough as a breather between the manic numbers. The brilliant Gibraltor Ape still has one of the best bass lines going and I’m glad they kept it for the album as it’s a joy to hear again.
The totally bonkers and infectious Obligatory Castration comes at you like a bullet with it’s futuristic lyrics about compulsory castration on all males reaching puberty to cull the population figures (who knows…). They then go dark and industrial with the brilliantly named Reptiles State Funeral which is quite a scary track (they mention Michael Gove!) and a little unnerving. Not a song to play to the uninitiated.  Album closer Subhuman is a psychedelic four minute funeral march which has James Skelly’s (The Coral) production skills written all over it. An amazing difficult (second) debut album.
I’ve seen many Manchester bands come and go however Cabbage have had me from day one. I bought their first effort Le Chou after hearing Kevin and was immediately hooked by their Gronk Wonk sound (a John Robb phrase everyone!) and sought to see them live. Blown away by their post punk youth I have followed them ever since. They have a massive back catalogue of tunes to die for and although I don’t want to mention The Fall I have to. The most original stuff since early Inspiral Carpets stuff like the Plane Crash EP. I don’t reckon we’ve had such a band in these parts for years. Their output has always been excellent and 20 odd songs in I thought they’d do a debut album full of old songs polished up. But this is it. A marmite band for the uninitiated crowd but to me a fantastic debut from the new leaders of alternative music. Some people might say I’m biased about Cabbage. Fuck em.
This album has been long awaited and I had to review it due to the pure diverse magnitude of It’s scope. Not your average indie band going through the ropes they have nailed it by surprising everyone with an album that defies categories and will always leave you guessing where they want to be. Steve (bassist) says “None of what we do is contrived. It’s always with a bit of humour and the best intentions. There’s no bravado for us to maintain. We can’t get caught out, because we’ve got nothing to hide”
Watch the video for Arms Of Pleonexia video here: